Projects we have implemented at Karamolegkos SA

The Karamolegos SA bakery has followed a successful course, starting in 1950 from an oven in Santorini. As a family business, it operated until 1989, the year in which it acquired its current legal form.

Having as values the quality, consistency, creativity, responsibility and passion for progress & development, Karamolegkos SA created the first bread for toast with leaven in 1999, and in 2003 created the first bread toast without crown. In the following years, large investments were made in technological equipment, enabling automated production using closed-type robotic machines. 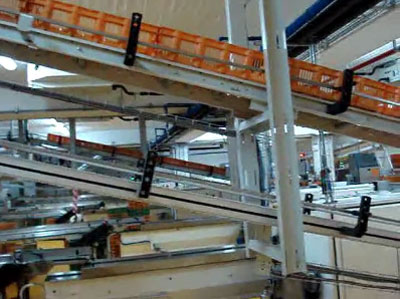 Karamolegos S.A. packages and distributes different types of bread and bakery products in plastic cases (trays). With the system we designed and installed, the company has fully automated the handling process of full and empty trays for the sliced bread and bread core production lines.

All subsystems are controlled by the main control panel, which monitors production in real time with the help of an industrial panel PC.